It was warmer than Summer in Vegas so I was eager to find some colder weather. I started planning my next major adventure by googling famous tundras and glaciers in every country. After an extensive search, I came across images of ice caves on Reddit which happened to be in Vatnajökull National Park and immediately made up my mind. 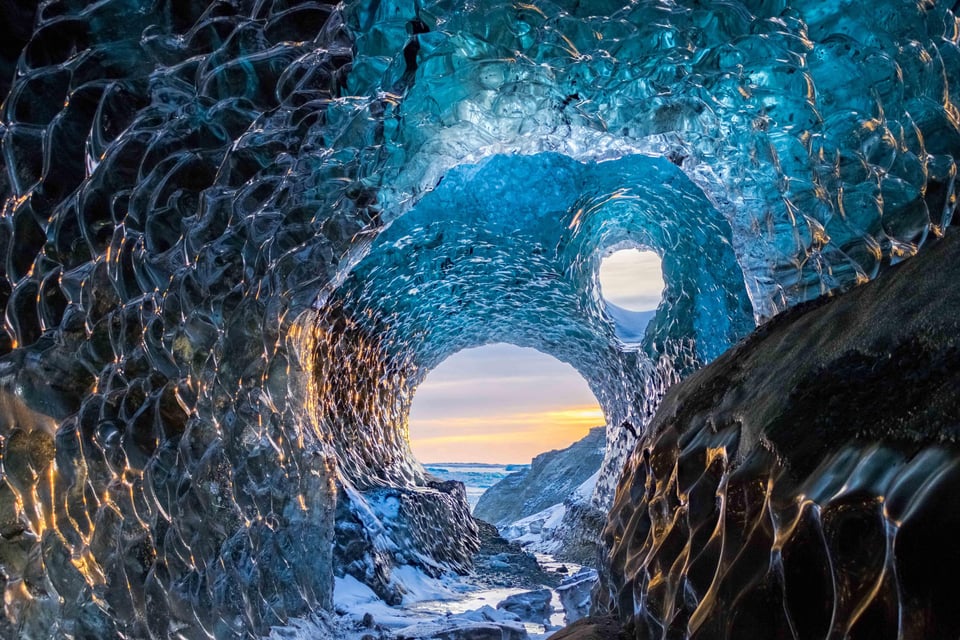 Located in Iceland, these caves are known to have some of the most supernatural things known to man. As I continued to read, I became engulfed and full of inspiration. After two days of planning, I realized this was not a expedition I could do myself and would have to reach out to a man I met while in the Sahara Desert. He goes by “The Wanderer.” He has unmatched survival skills and can craft a weapon from just about anything around him. Not to mention, we basically saved each other’s lives while being swept away by a flash flood. Therefore, I gave him a call and explained everything this mission had to offer. Without hesitation, he quoted Letter Kenny and said, “Pitter patter, let’s get at ‘er.”

Three weeks later we met and finalized the game plan. Little did I know, he decided to invite someone I’ve never met before. To say I was excited to see another person joining the expedition would be like saying you’re excited to deep clean a toilet. “Who’s this Jerry?” I said without thinking through the outcome of the remark. The Wanderer replied, “This is my—” but was interrupted by the intruder before he could finish. “I’m a fellow adventurer, but I’m known as The Explorer.”

My friend pulled me aside and explained his significance. The Explorer once saved him from an island. An island that he never thought he would make it off but this man went out of his way just to save him. After doing some research on his own, he discovered that there is something off about the place we were set on. There were many mysterious disappearances along with supernatural occurrences. Therefore, he consulted his friend before heading to meet me. He explained how The Explorer is known to be in touch with the spirit world and has unique ways of bringing good fortune.

After some course dialog, I accepted the fact that this “Explorer” was going to be a part of the team and bought a round of beers. As we began talking, The Explorer pulled out his notebook. On the front of the notebook was the mark of “The Shaman.” The same mark that guided us through the Colombian Jungle in search of El Dorado.

Immediately taken back, I asked him all about the mark. Smirking, he replied, “You see man, I’m not in it for the treasures, I’m in it for the experience. The mark I leave behind is to provide good fortune to all those that travel through dangerous territories after. All I wanted from that mission was to see the beast that guards El Dorado. I left the marks to help those who come after.”

It was almost like we were meant to all meet and do this adventure. I apologized for the rude introduction and we moved forward with our plans. The next morning we left and were on our way to Iceland.

Once we landed, we headed to base camp which was just outside of Kálfafell. From there we had a 50 mile trek ahead of us. We spent two days staying on track, snowshoeing up and skiing down from peak to peak until we saw a chute we couldn’t resist in the distance. Therefore we change our path and headed towards the summit of the chute. As we were walking, a fierce storm took control of the the mountains. The Wanderer suggested that we burrow our way down and form shelter so we followed his lead. We spent 2 days waiting out the storm until we were able to leave.

As we stepped outside, we couldn’t recognize the terrain anymore. The peaks were all the same height and the sun was blinded by the clouds. As I began talking frantically to The Wanderer, we heard murmuring behind us. We turned to see The Explorer doing some kind of weird yoga pose and whispering gibberish. We tried talking to him but nothing would break his focus. After 3 minutes, we decided to try and push him to snap out of it. As we were about to touch him the clouds slowly made a path for the sun to shine through. Instantaneously, The Explorer looked up, smiled and pointed towards our goal.

I don’t even want to know if it was him or sheer coincidence but we locked into our skis and started dippin’ through the chowda’ on the way to the caves. A few miles down, we saw a turquoise shine from one of the hillsides. That was our spot!! We had to transition back to our snowshoes to finish the trek although it was going to take some time with the newly formed powder. About another mile in we were greeted by another snow storm. Determined to make it to the caves we agreed to push forward.

After some time we saw something in the distance. It wasn’t a boulder, couldn’t be a tree and seemed as if it was starring at us. A hefty breeze came through and showcased the massive Yeti. Terrified I began looking for an escape route and spotted a narrow tunnel into the mountain side. The beast started charging us from 50 yards away so I asked The Wanderer to craft me a weapon. Within seconds I had a spear in my hand. Knowing there was no way to make it to the tunnel before the beast arrived I told them to leave. I was expecting some kind of, “Nooo! There’s no way we’re leaving you” but they dipped without hesitation.

The battle didn’t last long, I was able to wound it but had taken a severe beating before that. Harnessing my inner Leonardo DiCaprio from “Revenant”, I crawled towards the cave as the beast made its final charge. Falling into the cave I blacked out. When I woke up, I was surrounded by a Caribbean Blue light and two figures lingering above me. They handed me three items and said to eat them. Still concussed, I took a bite of all of them and began seeing clearly again. I stood up and looked at my two friends. How was I even standing? There was no possible way after the injuries I endured. Laughing, they pointed at a tree. A lemon tree, that also had limes… and cucumbers.. What the f**k was I looking at?

They began to explain it’s importance. After eating from the tree, The Explorer’s frost bite was healed and The Wanderer no longer needed his glasses. We found what we were looking for. We found a precious gem inside a cave we had no intentions on entering in the first place.

We packed, preserved the tree and later returned home. We decided that we should be a team. A team of The Wanderer, The Explorer and The Pathfinder. We would no longer search for gold and riches but for things that serve a larger purpose. Things that will make everyone happy. I mean, everything we’ve found on these trips happened to be fruits anyways so it’s not like anything was changing. We would take these fruits and craft them into the finest hard seltzer anyone can try. An Elvtd Seltzer to spread to everyone wanted a piece of our adventures.

Travel and photography blog by Nilla Palmer. Capturing the globe with words and lens. Come travel the world!

News, Weather & Sports For All Of Colorado

Investigating the uncommon, unusual, and rare within the craft beer community.

A blog about two of the three major food groups

A place to share our adventures, travels and what is to come

The Art and Craft of Blogging

The latest news on WordPress.com and the WordPress community.